On the death of Raimund Hoghe 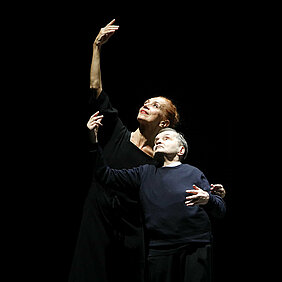 A restless man comes to rest. A chronicler of his time, an observer and interpreter of his time. One who threw his body into the struggle. For years, Raimund Hoghe belonged internationally to the most important choreographers who set standards both aesthetically and politically. Now he has unexpectedly passed away at the age of 72.

We want to commemorate him with the tribute that Raimund Hoghe received with the German Dance Award last year:

Hoghe, a choreographer and dancer, summed up one of the driving impulses of his theater work with a phrase by Pier Paolo Pasolini: "Throwing the body into battle." In his case, a body that does not conform to the norm or common ideals of beauty. His pieces reacted to the political times without ever losing sight of his own artistic signature: They were dedicated to explosive socio-political topics such as German history, diverse forms of exclusion or current politics, for example in Europe's treatment of refugees. His works share an archive of common social experiences that viewers* own stories can join. Hoghe's artistic work insisted on and practiced inclusion and diversity for many years without sailing under that flag.

Hoghe collaborated with exceptional dance artists for his creations, in which he danced and spoke, listened to music and acted in a variety of ways. Since the 1990s, he has been shaping an aesthetic all his own and has pursued it with unique intensity and consistency ever since. His high art of attentiveness, of heightened perception enabled a new view on dance and was not least an incessant experiment with beauty. The Dance Award 2020 honored the life's work of an artist who never tried to serve the system, but to change it with unusual courage and personal commitment.

Federal Association for Dance Germany
Board and management